Here are a few observations made during a 10-hour drive yesterday. 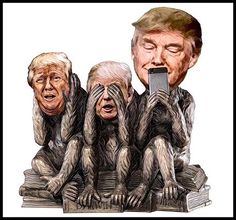 One of the virtues of Sirius XM is the ability to listen to one’s favorite cable news and talk shows while on the road.  However, yesterday we tuned out as much of the focus was on descriptions of Donald Trump’s “Salute to Me.”  As suggested by the above subtitle, based on a number of Trumpisms during the past week, Trump should replace his 2016 MAGA campaign slogan in 2020 with HNF-SNF-TNF (Hear no facts; see no facts, tweet no facts).  Consider the following evidence.

And this was just in one five-day period.  So, what do you call Trump statements over a 144 day span?  GROSS ignorance.

Iran, But Could Not Hide

Speaking of ignorance, it is a close race between Trump and the national news media.  Just in case you missed the administration’s latest attack on the Constitution, the Washington Post reports Secretary of State Mike Pompeo and “senior defense officials” since we still do not have a Secretary of Defense are building a legal case to justify military action against Iran.  However, reporters and journalist seemed to have missed the fact this is probably just one more move in the Russian chess match to undermine the Atlantic alliance with Trump’s complicit assistance.

Imagine a Tom Clancy novel based on the following story arc.

Oh, wait!  No need to wait for the novel.  It is already a television mini-series running on the nightly news.

When you drive through America’s bible belt, you cannot help but notice the billboards which ask “Who is Jesus?”  Having attended a AAA minor league baseball game in Norfolk, Virginia on Monday night, my first instinct was to reply, “I know. They must be referring to Jesus Sucre, the Tidewater Tides catcher and designated hitter.”

Any effort at humor was quickly replaced by more serious reflection on reports out of Clint and El Paso, Texas as well as Homestead, Florida concerning the treatment of infants and children in border patrol detention centers.  Who is Jesus?  Whether you believe in his divinity or not, such a thoughtful and compassionate teacher certainly is not someone who would approve of his followers turning a blind eye to the suffering of children.  Or to those who seek asylum (equivalent to the church’s honored tradition of “sanctuary”) and a better life for their families.

What’s more, I began to think about my experience driving through Europe in 2005 and Italy in 2010.  There were no billboards.  Yes, there were majestic cathedrals, modest village churches and religious icons everywhere, but those were not directed at me, the non-believer.  They were there as constant reminders to the flock of their shepherd’s values and their own responsibility to follow in his footsteps.

A better use of the money spent on trying to convince me there is only one path to salvation would have been to purchase soap and other hygiene products for the innocent infants and children incarcerated in wire cages.  Or even a billboard with a picture of the 7-year-old who died of a bacterial infection last December while in U.S. custody with the tag line, “Who is Jakelin Caal Maquin?” Or 2-year-old Wilmer Josué Ramirez Vasquez.  Or 16-year-old Juan de Leon Gutiérrez.  Or 8-year-old Felipe Gomez Alonzo.  Then, instead of “Who is Jesus?” hopefully everyone, especially many in the white evangelical community who refuse to speak out against the policies which precipitated these tragedies, will realize the more important question is, “What would Jesus do?”