Expect to see a sequel to Solo: A Star Wars Story despite the disappointing box office receipts for this latest addition to the cinema event which began in 1977.  If there is anything Hollywood abhors, it is a once popular franchise going out on a sour note.  Remember Indiana Jones and the Temple of Doom or anything about the plot or Harrison Ford’s co-stars?  George Lucas made sure you did not, teaming Ford with Sean Connery and the ancient city of Petra in the more critically praised and enduring Indiana Jones and the Last Crusade.  (Cinematic Footnote:  If only it had been the last crusade for this franchise.  It does not take a directorial genius to know a crystal skull is no match for the ark of the covenant or the holy grail.  To make up for this, Ford has agreed to a fifth and final appearance as the archaeologist in a projected 2020 release with Steven Spielberg at the helm. Good luck. )

In Tinseltown, one the most talked about failures of a successful franchise to satisfy its audience remains The Godfather Part III, in which (spoiler alert if that is possible 27 years after a film’s release) Michael Corleone (Al Pacino) dies alone, a broken man.  After all, the first two installments won Oscars for best picture.  Attempts at a fourth incarnation based on the rise of Sonny Corleone’s (James Caan) illegitimate son Vincent (Andy Garcia) as the family head dissolved upon the death of the book’s author and screenwriter Mario Puzzo in 1999.

On the morning following what can only be described as a five-day roller coaster ride in the annuls of United States foreign policy, my thoughts turned to one particular scene in the 1972 original.  Following Sonny’s fatal ambush at a toll plaza, Don Vito Corleone (Marlon Brando) calls a meeting of the heads of the five mafia families at a bank in New York City.  After acknowledging many of the attendees have lost loved ones as a result of the rivalry for control of various black market enterprises from olive oil to prostitution, Vito Corleone calls for a truce.

I hoped that we would come here and reason together.  And as a reasonable man I’m willing to do whatever’s necessary to find a peaceful solution to these problems…

As was the case in all three chapters of the Corleone saga, offers of reconciliation with enemies is a ruse that leads to the death of those who betrayed the family.  In the original, the bloodbath takes place during the the baptism of Michael’s son Anthony.  In Part III, the assassinations are carried out while Michael, his ex-wife Kate (Diane Keaton) and daughter Mary (Sofia Coppola) attend an opera in which aspiring singer Anthony performs for the Pope.

Which brings us back to the past week of Trump-style diplomacy.  For three-quarters of a century, the American president has been the de facto godfather of the North Atlantic Treaty Organization (NATO).  Yet, in less than five days, Donald Trump traded his standing in NATO for leadership of the latest version of the five families.  Except in this sequel, Emilio Barzini, Philip Tattaglia, Ottilion Cuneo and Anthony Stracci are played by Vladimir Putin, Recep Erdogan, Rodrigo Duterte and newcomer Kim Jung-Un.

Vito Corleone dreamed of the day when the family business would be legitimate and his son Michael (Al Pacino) might be elected to the U.S. Senate.  Fred Trump never imagined his son could become not senator, but president and also remain head of the five families.

One final piece of advice to the other members of this new alliance.  In the unlikely event Trump ever attends an evening of opera at the Kennedy Center or the Met, watch your backs.  Those scenes never end well for anyone who thinks getting in bed with the godfather is good for their health.

One of the unforeseen sideshows of the G7 summit was Trump’s Twitter rants directed at Canadian prime minister Justin Trudeau.  Again, The Godfather sheds some insight into what motivates the current occupant of the oval office.  When Michael Corleone offers to revenge his father’s attempted murder by taking out a corrupt police officer who participated in the plot, Michael’s older brother Sonny warns, “You’re taking this very personal.”  To which Michael mouths the phrase which becomes the second most quoted excerpt from Puzzo’s script, “It’s not personal.  It’s strictly business.” 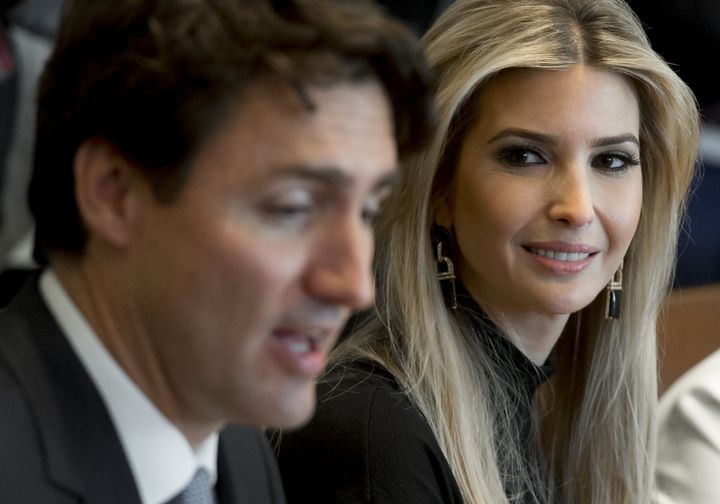 Except in TrumpWorld, it is always personal.  Remember this picture from Trudeau’s visit to the White House in February 2017.  The Guardian carried the photograph under the headline, “Pictures of ‘swooning’ Ivanka Trump and Justin Trudeau go viral.”  One can only imagine how much daddy wishes his daughter would view him in the same light.

1 thought on “The Godfather Part IV”