During the hiatus between his two marriages, comedian Ron White discovered that stand-up comics also have groupies.  He tells the story about an experience in Austin, Texas when a woman approached him after the concert and offered to spend the night with him.  He asks, “Why me?”  Her reply.  “I’ve f***ed hundreds of guys and not one of them has ever satisfied me.  I’m hoping you’ll be different.”  To which White conjectures, “Have you ever thought, MAYBE IT’S YOU?” 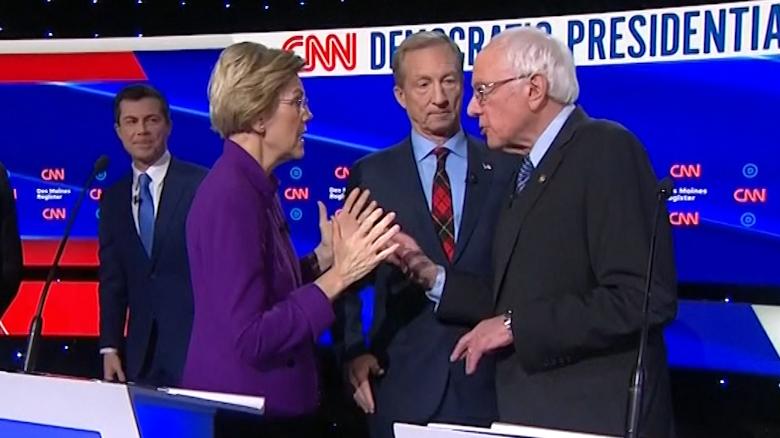 White’s routine came to mind this morning when the consensus among the hosts and guests on MSNBC’s “Morning Joe” was none of the six participants in last night’s Democratic debate in Des Moines had what might be called a break-out moment.  At which point, they next started to question whether any of them demonstrated an ability to take on Donald Trump in the fall.  So, to paraphrase White, if you’ve watched two dozen candidates debate and none has left you satisfied, maybe it’s not the candidates, maybe it’s the debate itself.

If you wonder why I’ve stopped watching Chuck Todd, Chris Matthews, Rachel Maddow, or CNN in general in favor of Joe Scarborough and Nicolle Wallace, today is the perfect example.  They get it.  The six people on the Des Moines stage last night are not running against each other, they want to replace Donald Trump.  And yet they continue to let debate moderators frame the format and discussion.  The most obvious example was the following exchange between Bernie Sanders and Elizabeth Warren about a reported conversation in which Sanders allegedly told Warren a woman could not win in 2020.

MODERATOR ABBY PHILLIP: So Sen. Sanders — Sen. Sanders, I do want to be clear here, you’re saying that you never told Sen. Warren that a woman could not win the election?

SANDERS: That is correct.

PHILLIP: Sen. Warren, what did you think when Sen. Sanders told you a woman could not win the election?

WARREN: I disagreed. Bernie is my friend, and I am not here to try to fight with Bernie. But, look, this question about whether or not a woman can be president has been raised, and it’s time for us to attack it head-on.

WTF. Talk about gender bias.  I know women often complain, rightfully, that men don’t listen to what they have to say, but this proves the offense is not a one-way street.  Sanders says, “I didn’t say it.”  Yet, Phillip proceeds as though Bernie had admitted it.  If you’re going to raise the issue, at least ask an appropriate follow-up such as, “Sen. Warren, how do you feel about Sen. Sanders denying he ever said that?”

How is the Democratic Party permitting this?  Trump is in Milwaukee saying whatever he wants for hours on end, and Democratic contenders are given 90 seconds to talk about things that do not matter.

Now listen to how Scarborough assessed the situation.  He suggested both Warren and Sanders ignore the question.  And shared his experience when he first ran for Congress in 1994. Every time he was asked about one of his primary opponents, he made the question about why the district needed to have someone in D.C. to keep Bill Clinton in check.  And by the way, he ended up with 61 percent of the general election vote, flipping the district from blue to red for the first time in 35 years.  He went on to say if he had been on the stage, he would have brushed the question aside by stating, “This election is not about any of us.  It’s about replacing Donald Trump who in the last 48 hours thought it was okay to retweet a racist PhotoShopped picture of Chuck Schumer and Nancy Pelosi in Muslim clothing.  I do not.”

If you’ve not seen TV advertisements produced by Republicans for the Rule of Law (RRL) or by the Lincoln Project, they are examples of how former Republican strategists deliver clear and powerful messages.  And fortunately, this year they agree another four years of Trumpism would be a national tragedy.

In “Send a Message to the Senate,” RRL shames Republicans who would dare support Mitch McConnell’s efforts to conduct a sham impeachment trial.  Or the Lincoln Project spot titled, “Cory Gardner-Do Your Job,”  reminding Colorado voters their Senator would rather defend Trump than the Constitution.  McConnell’s admission there is no Republican appetite for a dismissal of the charges without a trial, something that was being floated only days ago, suggests these hard-hitting commercials are having an impact on public opinion and a few Republican senators.

Digging deeper into campaign strategy always seems to bring me be back to the idea that political contests are no different than any entrepreneurial venture except the currency is votes, not monetary profits.  And as we tell any student who asks how is the best way to make money as an entrepreneur, there is only one answer, “Create value first and the money will follow. You don’t need to destroy the competition, you just need to create more value than they offer.”  In 2020, for me, value is defined as mounting a campaign that brings an end to the Trump presidency.  You do not do that by wasting time worrying about the competition or waiting until you win the nomination.  You start TODAY if you haven’t already, and primary victories and the nomination will be the natural by-products of that value creation.