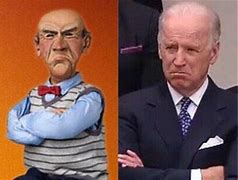 No, my leg doesn’t tingle when I hear Joe Biden address a crowd, as Chris Matthew once said after Barack Obama’s acceptance speech at the 2008 Democratic National Convention.  And even if there wasn’t a pandemic, I wouldn’t ride the Metro to the Washington mall to join in the inaugural celebration as I did in 1988.  Admit it, he does resemble ventriloquist Jeff Dunham’s puppet Walter.  I’m not even sure he is the best person to govern the nation for the next four to eight years.

But neither am I in the category of those described in an article on NewsMax.com this morning titled, “Some Hate Trump So Much That They May Tolerate Biden.”  In fact, the more I think about it, Joe Biden is the perfect candidate to take on Trump in November.  Why?  For all intents and purposes, from Super Tuesday on, once Biden became preemptive nominee, the election was settled.

Dr. ESP, are you really that confident in the outcome?  First of all, being Dr. ESP, I knew you were going to ask that question (a little Nostradamus humor).  But seriously, yes I am.  In normal times, relatively unknown candidates have to spend significant resources on boosting name recognition and introducing themselves to the electorate.  This year, when the campaign is increasingly likely to be a non-campaign, a Pete Buttigieg, Amy Klobuchar or Cory Booker would have been at a major disadvantage.  To get that kind of attention you need to be unveiling new policies and programs day after day.  The danger being, you are just as likely to say something that will turn off undecided voters as bring them on board your bandwagon.  For any of the Democratic contenders except Biden, it would have been a steeper uphill climb.

We know Joe.  We know his strengths and his flaws.  How many times has the Trump campaign missed the mark trying to take him down?  Ukraine?  How well did that work out?  Can you say, “Impeachment?”  Tara Reade?  The only thing that came out of that was to remind voters of the sexual assault and character defamation suits waiting for Trump after he leaves the Oval Office.

And it’s not just about what hasn’t worked, but what won’t work in the future.  Pick any scandal du jour.  The arrest of Jeffrey Epstein’s accomplice Ghislaine Maxwell.  A lot of big names are sweating this one including you-know-who.  Biden?  Not among the nervous.  Well connected politicians getting preferential treatment when it comes to federal COVID-19 relief funds?  Again, Biden, missed out on the action (a good thing).  Or the number of tell-all books by family members or former associates?  Don’t hold your breath waiting for “What Happens on Amtrak, Stays on Amtrak” by the conductor of the DC to Wilmington express.

Not that the Trump team will stop throwing spaghetti against the wall.  They will certainly accuse him of saying things he never said.  They may even reach deep down into the old pack of cigarettes to remind voters of Biden’s votes on the crime bill and the Iraq war resolution.  But it will be old news, baked into voting decisions months, if not years, ago.

Their last gasp may be to draw on Trump’s endless efforts to project his own flaws onto others, charging Biden with the well documented indiscretions which have plagued the administration this year.  Consider the following.

I know, this was supposed to be a serious post.  And it started out that way.  But, as they say, “The road to hell…”  Hopefully, the jocularity further proves the point.  When your candidate is a lying, race-baiting, xenophobic narcissist, it is going to take a lot of imagination to make a case against the other guy, especially when he is just your average Joe, especially one with a sense of humanity, decency and humility which is just what the founding fathers ordered.

1 thought on “An Average Joe”