NOTE:  Sometimes you have to admit when you have been scooped.  While preparing the next installment in the series “The Case for…”, a Google search provided several articles based on the same concept, the best being Ezra Klein’s series at Vox.com.  And when many posited similar conclusions about the assets each major candidates brings to the race, it was time to cry “uncle.”  Deprogramming101 is about finding the “other” story or pointing out what the mainstream media has missed.  And I could not make a “case for…” that.

FACT #1:  To secure the Democratic nomination for president, the winning candidate must arrive at the Milwaukee convention with 1,886 pledged delegates.  As of this morning, Sanders has 21 locked up.

FACT #2:  Sanders is in second place when it comes to the current delegate count.  By virtue of his surprise showings in both the Iowa caucuses (we think) and the New Hampshire primary, Pete Buttigieg leads by one with 22 delegates.

FACT #3: Five candidates surpassed the 15 percent “viability” threshold in one or both of the first two nomination contests–Sanders, Buttigieg, Elizabeth Warren, Amy Klobuchar and Joe Biden.  The total among the three “moderate” candidates is 35 compared to 29 for the two “progressive” candidates.

FACT #4:  When you look at the results from the New Hampshire primary among these same five candidates, you get a similar picture.  Buttigieg, Klobuchar and Biden received 53.9 percent of the votes cast on Tuesday.  Sanders and Warren picked up a total of 34.9 percent.

FACT #6:  Despite a few write-ins, neither Iowa or New Hampshire provide any clue whether Michael Bloomberg’s decision to by-pass contests in the first four states will pay off for him.

FACT #7: Donald Trump, facing nominal competition in the Republican primary, urged his lemmings to mess with the Democrat primary by voting for the weakest potential opponent.  Though he did not name names, on numerous occasions, the Trump campaign indicated it relishes the opportunity to run against a self-proclaimed “socialist.”

Exit polling in New Hampshire provides additional insight to why any candidate cannot be considered THE front-runner in mid-February.  Again, it is helpful to look at the aggregate totals for candidates in the so-called moderate and progressive lanes.

MEN: 49 to 38 percent in favor of moderate candidates.  Equally important, men made up only 43 percent of New Hampshire Democratic voters.

WOMEN:  Accounting for 57 percent of all votes, women went 51 to 33 percent for moderates.

IDEOLOGY:  As one would expect, voters who identified themselves as “very liberal” (21 percent of the total vote), preferred Sanders and Warren by 65-30 percent.  Yet, voters who self-identified as “somewhat liberal”(40 percent of all voters) supported moderates by 55-36 percent.

Why does this matter?  Two reasons.  First, it is the political equivalent of the Discovery Channel program “MythBusters.”

Which brings me to the second and most important reason why no candidate, especially Bernie Sanders, can lay claim to front-runner status.  To be consistent, rational political pundits must apply the same logic to the race for the Democratic nomination they do to the general election.  You cannot say Trump, despite 93 percent approval among the declining number of registered Republicans (actually Trump cultists), has a lock on re-election.  And then suggest Sanders will be hard to stop when he too has an equally avid following among a small subset of the total Democratic electorate.

One of two scenarios will play out.  In the first scenario, one of the moderates will break out from the pack and moderate support will consolidate behind that candidate. Bernie Sanders cannot win the nomination with the most rabid voters if they represent between 35 to 40 percent of the party faithful. 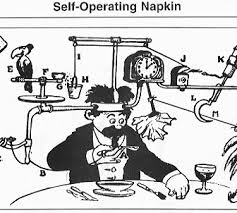 Scenario #2 depends on two or more moderates remaining competitive throughout primary season, in which case no one comes to Milwaukee with the required majority of delegates.  And here is where it gets really complicated thanks to the Rube Goldberg mentality which guided DNC reforms to the nomination process following the over-weighted influence of super-delegates (elected officials and party leadership) in 2016.  I hope you are sitting down.

If 2016 provided any insight, the overwhelming majority of super-delegates also fall in the moderate category which assures Sanders would not walk away from a brokered convention with the nomination.  Though he might influence which of the remaining moderates carry the day.

Unlike Donald Trump, I do learn from my mistakes.  And I refuse to be scooped again by hesitating to go out on a limb until I am more confident in my speculation.  So, here goes.  Scenario #3 is a brokered convention at which none of the previous candidates is viewed as the “uniter” who can bring together the moderate and progressive wings of the party.  The search begins to find an alternative who has the best chance of both reconciling intra-party differences and more importantly defeating Trump.

There is one logical choice.  Senator Sherrod Brown of Ohio.  No Republican has ever won the presidency without carrying Ohio.  So, the answer to the question, “How do you assure Trump loses?” is to nominate the only Democrat who has constantly demonstrated he can turn Ohio blue.  Brown first won his Senate seat in 2006 by defeating incumbent Mike DeWine by 12 percentage points (56-44).  Yes, Mike DeWine, the current Ohio governor.  In two successful races for re-election he won by six or more percentage points and did better on election day than predicted in the polls.

As for uniting the party, Brown has aligned with Sanders on many policy issues yet endorsed Hillary Clinton in 2016.  In May, 2017, Washington Monthly reporter D. R. Tucker wrote the following about Brown as a potential 2020 Trump opponent.

He may not run. He may decide that pursuing justice is a more worthwhile goal in the Senate. However, if he runs, Brown might be able to bring “establishment” and “progressive” Democrats together at the same time the Republican Party falls apart.

Tucker was correct.  In March 2019, Brown announced he would not run for president.  But he said something similar in August 2005 when he passed up a chance to challenge two-term incumbent Republican Senator DeWine.  But when his party called, he changed his mind and the rest is history.

Conclusion?  Data from exit polling tells us the noise on Twitter is exactly that.  The majority of Democrats are in the center or just to the left of center.  The only thing that is un-centered is media coverage of the nomination process.